Girls at Work, Inc. empowers girls with tools, unleashing their power and potential to accomplish anything.

Our vision is a world where every girl feels confident and capable.

To learn more about how we utilize our resources and programs to maximize our impact, click here to view our documented outcomes. 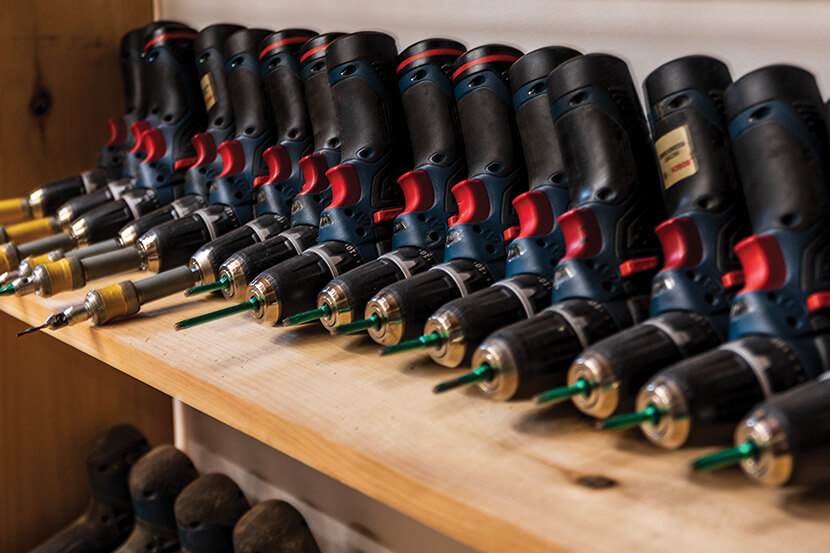 Our programs are designed to build confidence, strength and resilience through building with power tools in our after school, team builds, and “Build Me Up” summer camps. Our workshops and meeting spaces are located in the Millyard in Manchester, New Hampshire.

In addition to our after school, middle school builds, vacation and summer camp programs, we can customize a program for you and your organization. For birthday parties, home school groups, youth organizations, non-profit, women’s and/or team builds, we’ll develop a build event that sharpens critical thinking and fosters teamwork and connection.

“I am blown away by the impact this program has on the girls served. I believe that all girls should have the chance to participate and find voice, confidence and success in this program.”

Our Board of Directors

Heather Anderson is the Director of Aftermarket and Sales Operations for Bosch Heating and Cooling North America, and is a long time supporter and fan of Girls at Work, Inc. Heather brings to us an extensive management and operational customer support experience, as well as her talent for proactively identifying and resolving problems. Heather earned her BA in Political Science from Tufts University, and her MBA from Southern New Hampshire University.

Donald E. Bossi, Ph.D. is a General Partner with Technology Venture Partners (TVP) and has been actively engaged with the firm’s venture-capital investments, both as an operating executive and as a representative of the firm. As Chief Executive Officer (CEO) of two TVP portfolio companies, Aegis Lightware, Inc. and Inlet Technologies, Inc., Don was pivotal in leading the expansion efforts of both companies, as well as positioning them for successful acquisitions. In addition, he has served in key Board and Advisory roles across several TVP companies at various stages. Prior to TVP, Don was Group President of JDS Uniphase Corporation’s Transmission Products Group, a division that grew ten-fold under his leadership. Don also served as President of FIRST, the leading global non-profit organization that inspires young people’s interest in science, technology, and engineering. Don holds B.S., M.S., and Ph.D. degrees in electrical engineering from the Massachusetts Institute of Technology (MIT) and is an owner of a number of U.S. patents. Has also serves on the Boards of Directors for several privately held companies and non-profit organizations.

Martha Dickey is the Director of Donor Relations for the New Hampshire Community Loan Fund. She recently completed her MBA in Leadership from Franklin Pierce University, and brings over 20 years’ experience in fundraising, corporate relations and leadership development to the Board. During her career, she has improved advancement operations at FIRST and the Friends Program. A Massachusetts native, Martha resides in Northfield and enjoys spending time with her children and grandchildren in her “free” time. She is a tireless advocate in the Mental Health space and has helped pass legislation in New Hampshire around mental health and suicide awareness and prevention.

Ken Hamel has over 38 years of operations, finance and Information Technology experience in the technology industry. He has a long-tenured history at SAP, a global software company, joining in 2003 and held numerous leadership roles on the global senior executive team including Executive Vice President.  Previous to SAP he served as Vice President at Oracle Corporation and prior to that several years in financial management at Digital Equipment Corporation.  He is currently serving as a Senior Advisor at Bridge Growth Partners, a private equity company focused on technology companies. Ken is also on the Board of Syniti, a privately held software company. Ken is currently a Corporator at Perkins School for the Blind and previously served on the Executive Board of Daniel Webster Boy Scouts Council.

Lauren Smith is the former Chief of Staff for Mayor Joyce Craig in Manchester, New Hampshire. In that role, Lauren oversaw all administrative, policy, communications, and operational activities for the Office of the Mayor. Previously, she served as the Communications Director for a local labor union and led the public relations division of a communications agency on the seacoast. She is a graduate of Leadership Greater Manchester, a former Harvard Bloomberg City Leadership Initiative Member and a New Leaders Council Fellow. A Midwest native, Lauren holds a B.A. in American History and B.A.J.M.C. in Advertising from Drake University. In her spare time, Lauren attempts to read one book a week, with varying success.

Christina Stahlkopf is the Head of Fashion Brands, Global Consumer Insights for Hasbro. Christina is an innovator, pioneer methodologist, sociologist, author, and academic lead. She combines analytic rigor with imaginative thinking to help brands achieve their ambitions. In 2022, Christina nominated and pitched Girls at Work, Inc. to her Hasbro colleagues worldwide – out of 30-50 worthy organizations, Girls at Work, Inc. was ranked in the top 5 nonprofits globally!

Dr. Shanita Williams is a TEDx speaker, coach, author and the Associate Vice President of Talent Engagement and Inclusion at Southern New Hampshire University. For the last 15 year, Dr. Williams has helped organizations think about how to cultivate engaged and inclusive cultures that empower employees to reach their highest potential. As a leader in HR, she partners with Senior Leaders and Executives to understand employee engagement trends and develop strategies that help the organization recruit, retain, empower and develop world class talent.

Elaine believes teaching girls and women how to use power tools to build provides an experience that shatters the lens of powerlessness that so many struggle with. Girls need extreme measures to silence the voices of self-doubt that consume them at every turn. She believes building does just that and also enables them to discover that the most powerful tool in their arsenal is their voice. Elaine has: Melissa Cotter is a New Hampshire native. She graduated with a Bachelor of Fine Arts degree from Endicott College. After falling in love with woodworking in college and working several years as a carpenter, Melissa is now a program instructor at Girls at Work, Inc. She loves the confidence that girls gain and the excitement they have after building their first projects. Melissa believes that programs like Girls at Work, Inc. are crucial for young girls to realize their potential and open up doors for their future. When she’s not teaching young girls how to use power tools, she is spending time with her family and endlessly renovating her Manchester home. Erika joined the team in 2022. Before arriving at Girls at Work, Inc., Erika served the Nashua Soup Kitchen & Shelter (NSKS) for nearly 20 years in a number of roles, including Director of Finance and Administration, Finance & Facilities Manager, as well as a member of the Board of Directors. Prior to and during her tenure at NSKS, Erika was the sole proprietor of Shoebox Automation: Bookkeeping for Small Business and Nonprofits for 20 years. She enjoys spending time with her family and friends, hiking, creating, and volunteering. Her personal tagline is “Working to make the world a better place!” – and she does this every day by empowering our young girls and building their confidence. Amy graduated from Bridgewater State University with a Bachelor of Science degree in physical education. In 2018, she earned her Master Gardener Certificate from the UNH Extension Program. After many years as a landscaper and a professional gardener, Amy was excited to join the Girls at Work, Inc. team as an instructor in 2022. She loves to witness the transformation in the girls when they begin to see what they are truly capable of. Amy believes it’s vitally important that young girls learn early, and are shown often, that there are many avenues to success if we work together and teach and support one another. When she isn’t landscaping or working with the girls, Amy enjoys gardening at home with her dog George, spending time with family and friends, hiking, and snowshoeing. Craig & Joe are our two building project prep volunteers. These dedicated and energetic gentlemen arrive every single weekday morning to prepare lumber and materials for the projects the girls will be working on each afternoon, as well as for our off-site team builds. Craig and Joe volunteer well over 1,000 hours annually. Without their dedication and hard work, we would not be able to offer the volume of programming we do! You Have the Power to Empower

CONTACT US
QUICK LINKS
SIGNUP FOR OUR EMAIL NEWSLETTER
© 2022 Girls at Work, Inc. All Rights Reserved. Site design and management by DPi Graphics with support by ADVANCEMENT ROI, LLC.
Contact Us

We're not around right now, but you can send us an email and we'll get back to you, as soon as we can.